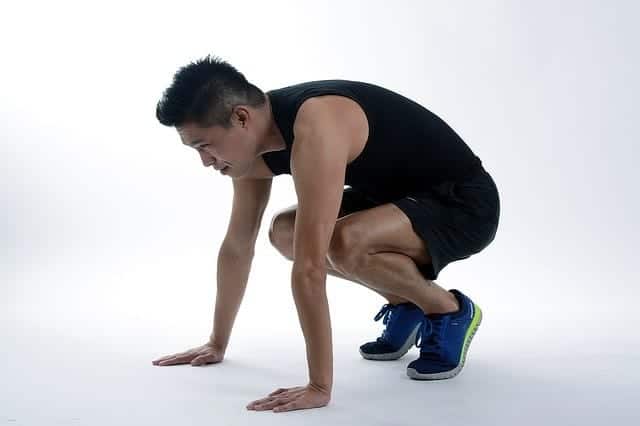 Tone your thighs and glutes with bodyweight squat workouts.

No doubt about it, there’s no better way to tone your legs than to maintain well-planned bodyweight squat workouts. I just found four of them, and I personally believe they’re the best in terms of intensity and efficiency. Check out the step-by-step instructions on performing these bodyweight exercises, and you’ll soon have the strongest thighs and the most-toned glutes. 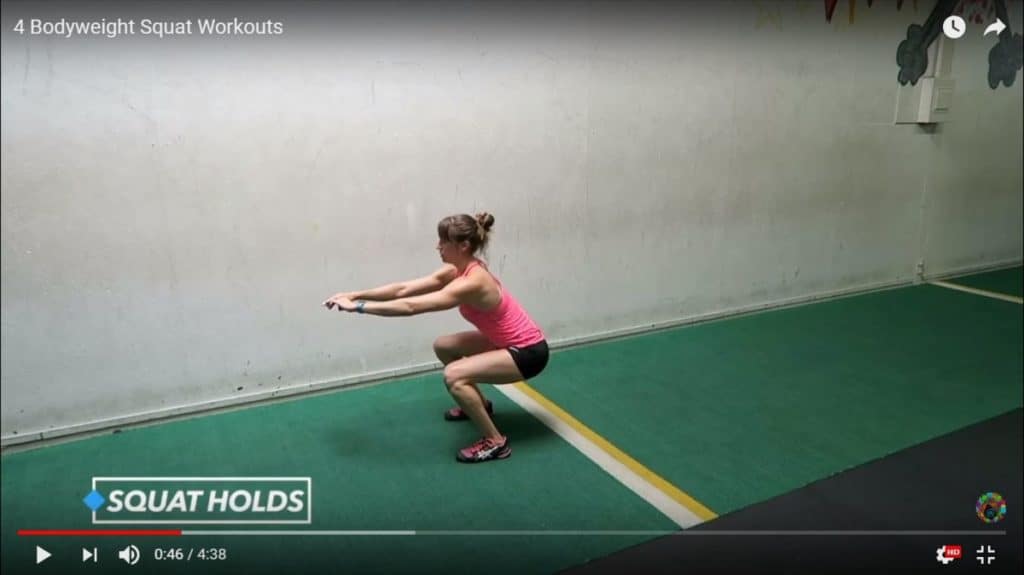 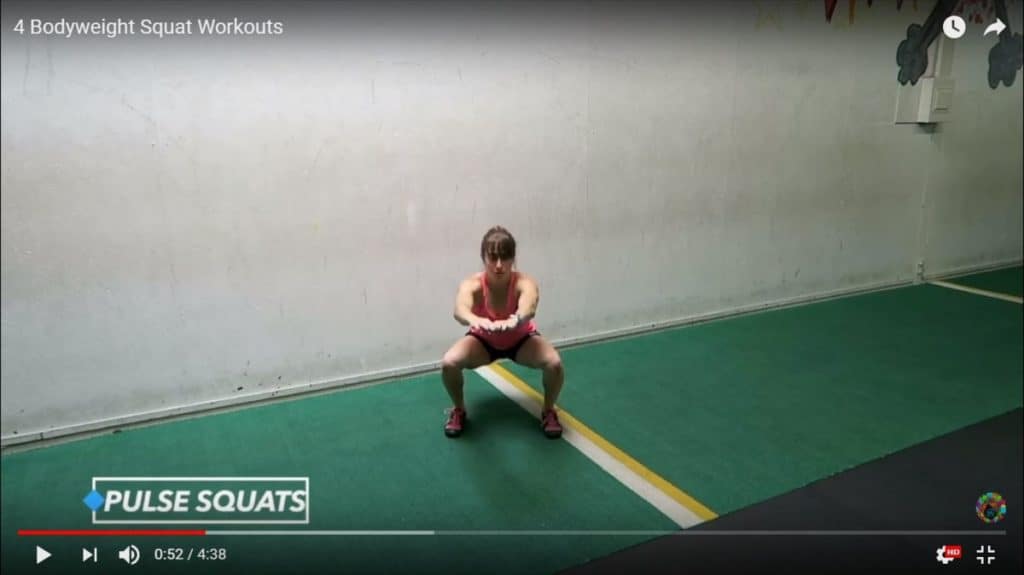 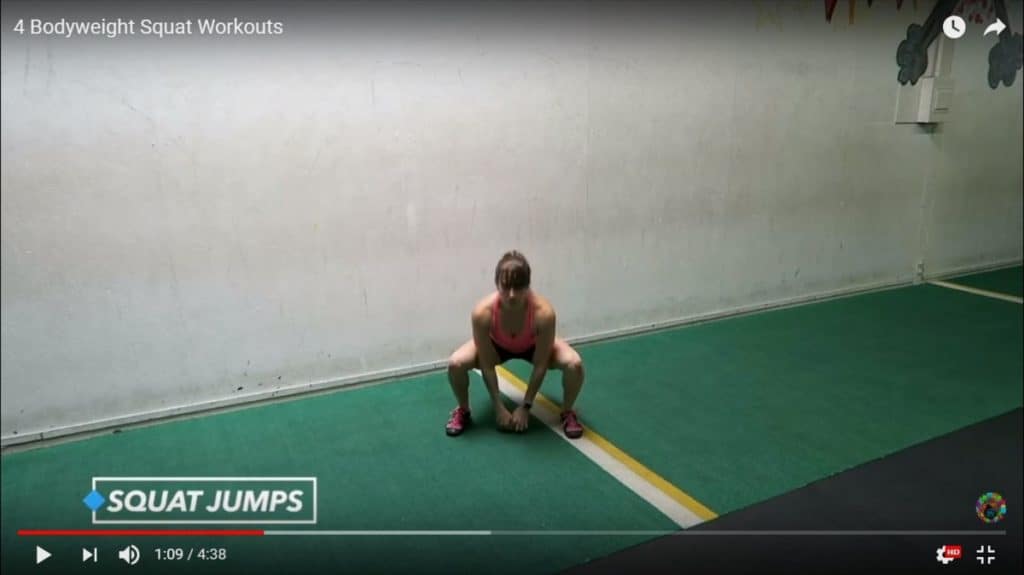 This first workout has quite an interesting name. You’ll later know why. Anyway, you’re going to set 20 seconds for each of the exercises in this bodyweight workout. The object is to dismiss resting. Just do one exercise after another, one round after the other. Do 5 rounds, and you’ll make the most of these body weight squats. So, your exercises are as follows:

1a. Red Light: The Squat Hold

The first exercise equates to the “red light” in this workout. To keep it brief, you’re doing a basic squat, but you’re holding yourself in the squat position for 20 seconds.

Starting Position. Stand straight with feet apart, slightly wider than a shoulder-length. Place your arms on your sides. 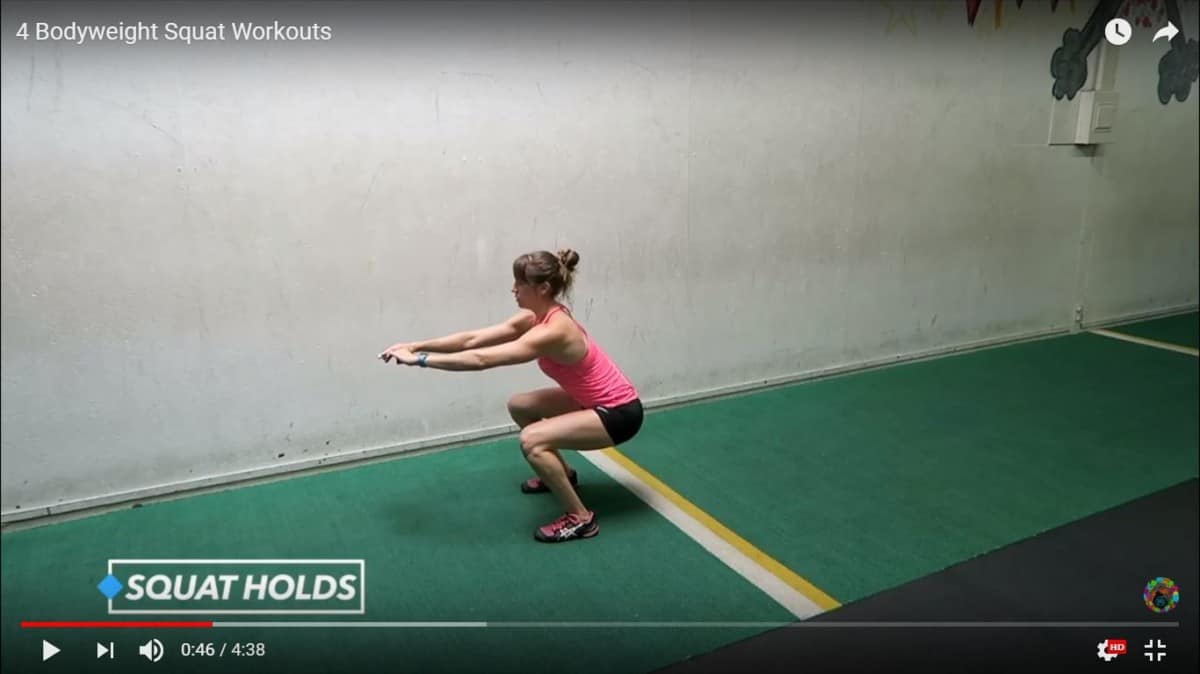 The Squat Hold. Bend your knees to lower your body while moving your arms up and forward. Slightly clasp your hands together, one hand slightly over the other. Your back should now be slanted about 45 degrees forward and your thighs nearly horizontally straight. Now, hold it right there for 20 seconds.

1b. Yellow Light: The Pulse Squats

It’s plural because you’ll do a lot of them in 20 seconds. The pulse squats serve as the “yellow light” to the final exercise for this workout, which consists of jumps. In a way, you’re warming up in this second exercise. That means you’re making yourself ready for a jump — and a series of them.

Starting Position. From the squat hold, stand back to the first starting (standing) position. 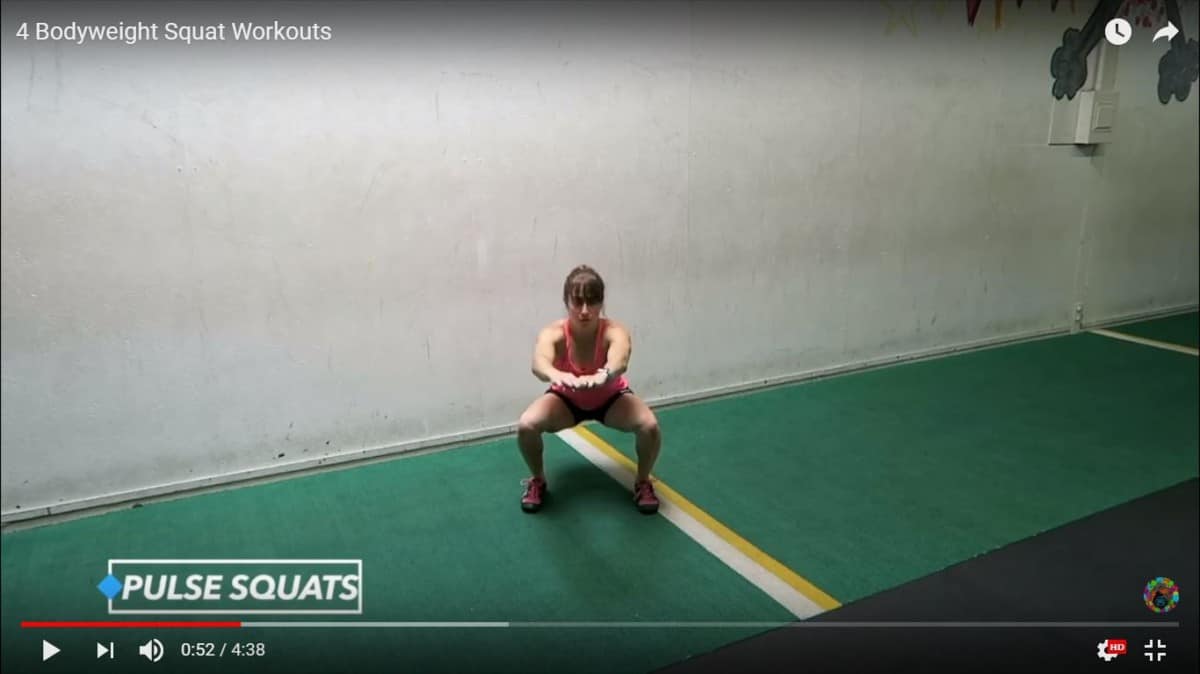 The Pulse Squats. Lower your body as in the squat hold, but this time, don’t hold it in that lowered position. Instead, keep the squat short, and very slightly and quickly, bend your knees up and down again. You’d look pulsating (counting 1 and 2) just before you stand straight up to get back to the initial position.

Reps. Do as many pulse squats in 20 seconds.

Again, you’ll do a lot of these squat jumps, so the third exercise for this workout is plural. As the “Go!” portion of this set, you’re going to jump straight up after squatting instead of just standing.

Starting Position. Begin with the standing position described above, but instead of placing your arms to your sides, put them in front of you with your hands clasped. Also, position your feet even wider apart. 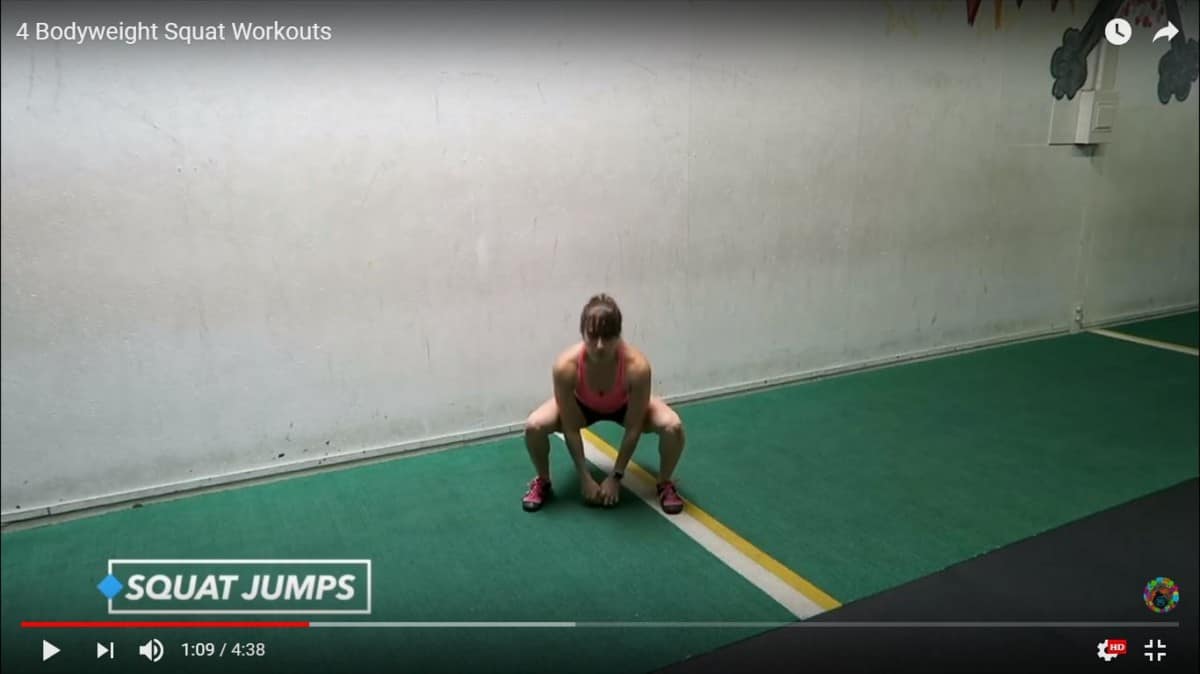 The Squat Jumps. Proceed to the squat position but this time, keep your arms just hanging in front of you. Let your fingers touch the ground and immediately jump up. Get down back to the squat and quickly jump again. In effect, you’d look like a leaping frog but one who only jumps upward. 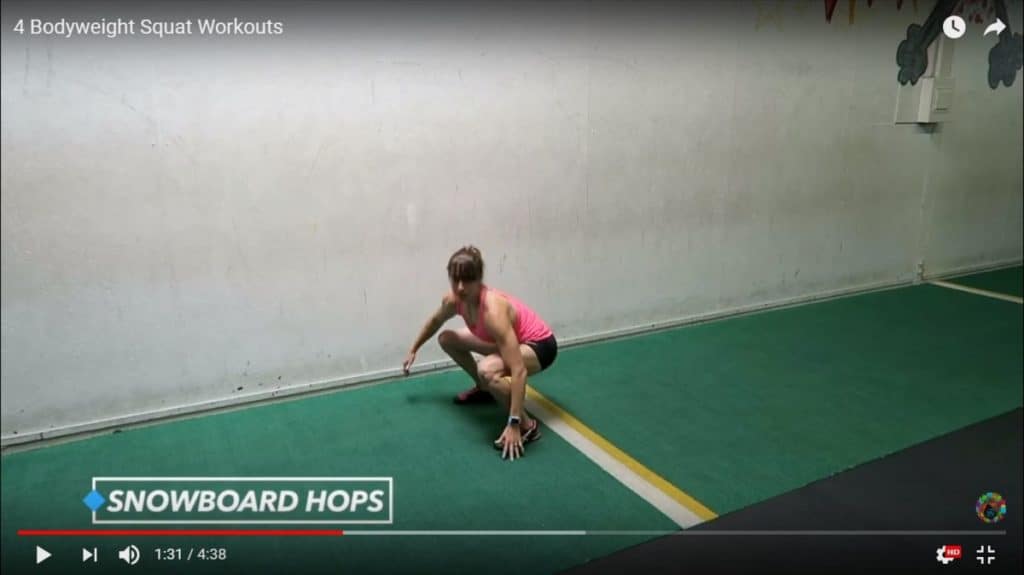 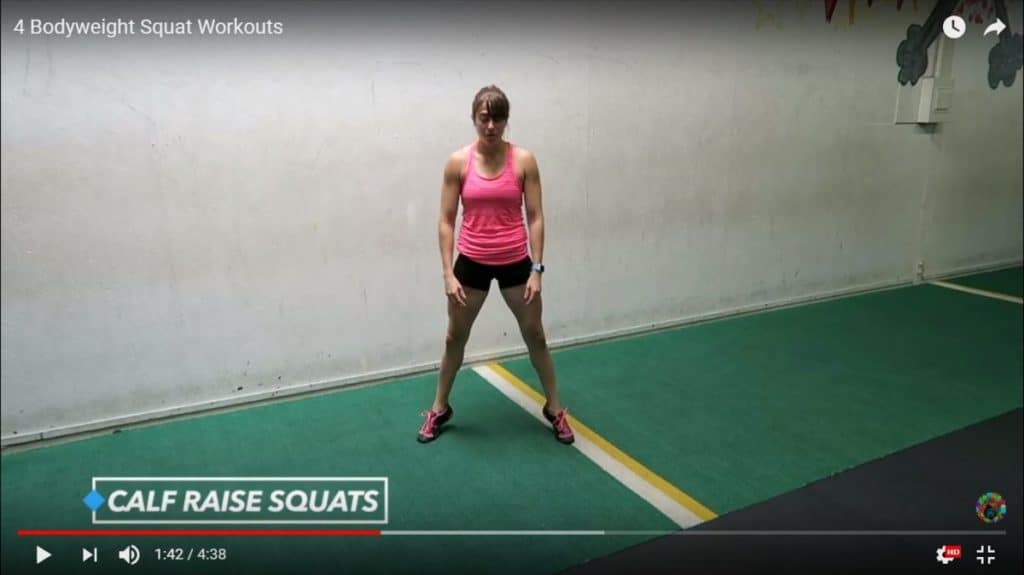 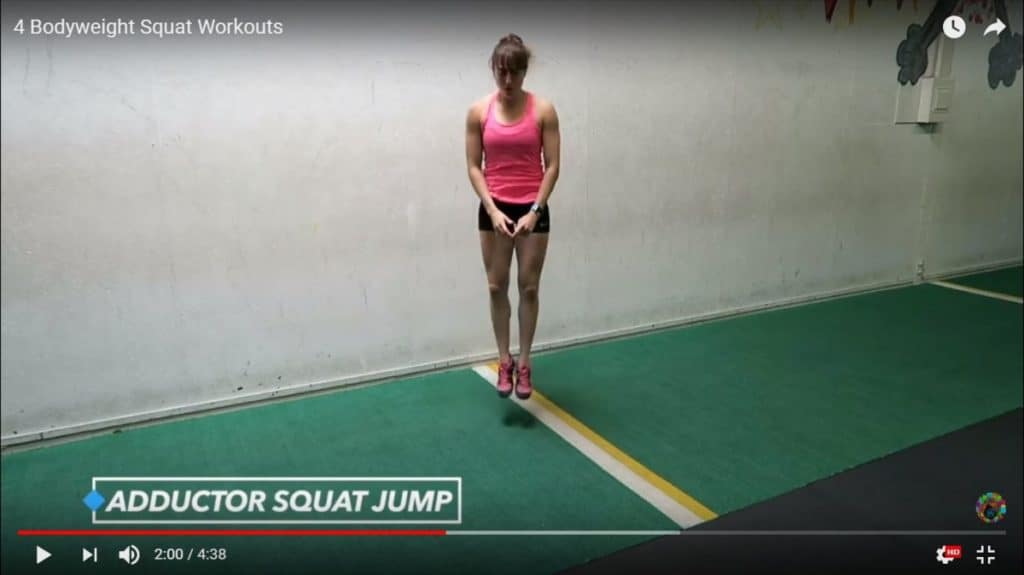 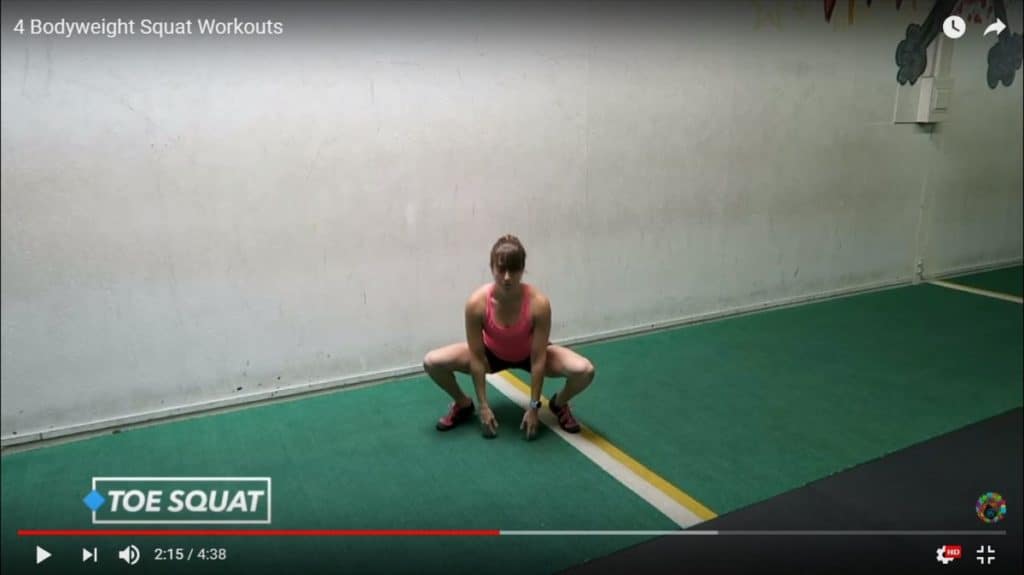 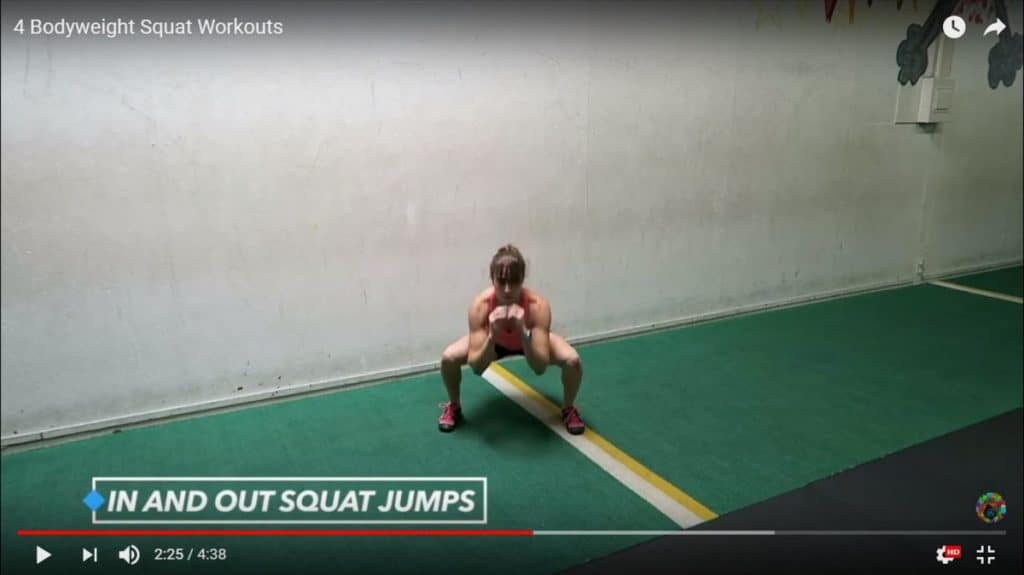 2e. In and Out Squat Jumps. Credits: Redefining Strength/YouTube 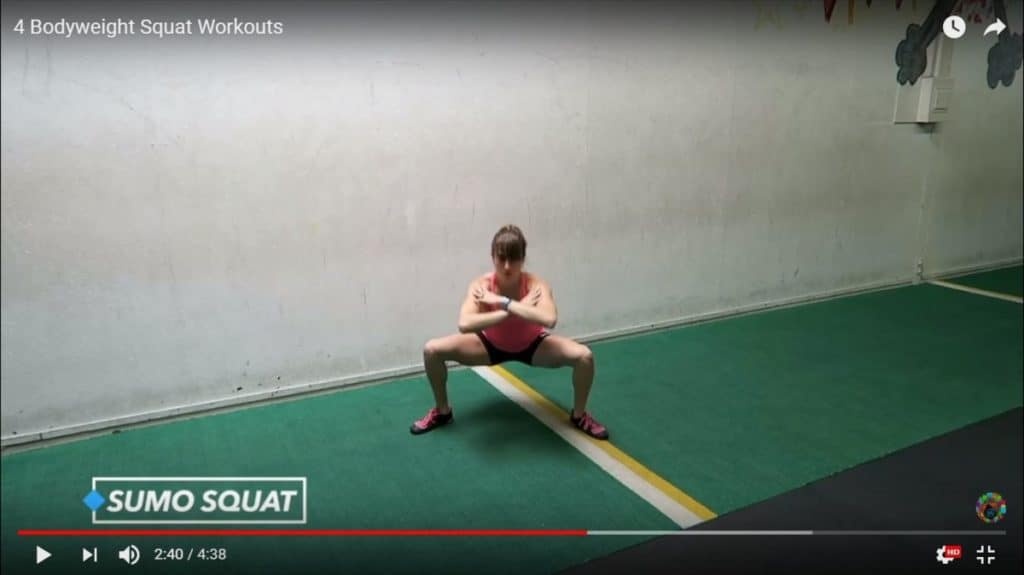 The second workout looks like it has a rather scary name. We’ll see if the bodyweight exercises in here could really scare us off or simply give us just enough challenge.

Your goal here is to complete 300 reps as fast as you can. In other words, it’s about the intensity. Here, you have 6 exercises, and you should perform each in 50 reps. Can’t wait for the list? Here you go.

As seen from the corresponding screenshot for this bodyweight exercise (see 6-image gallery above), you’re going to look like a ninja preparing for a fight. You’re flipping your body, taking turns facing your left and right sides.

Take a closer look below: 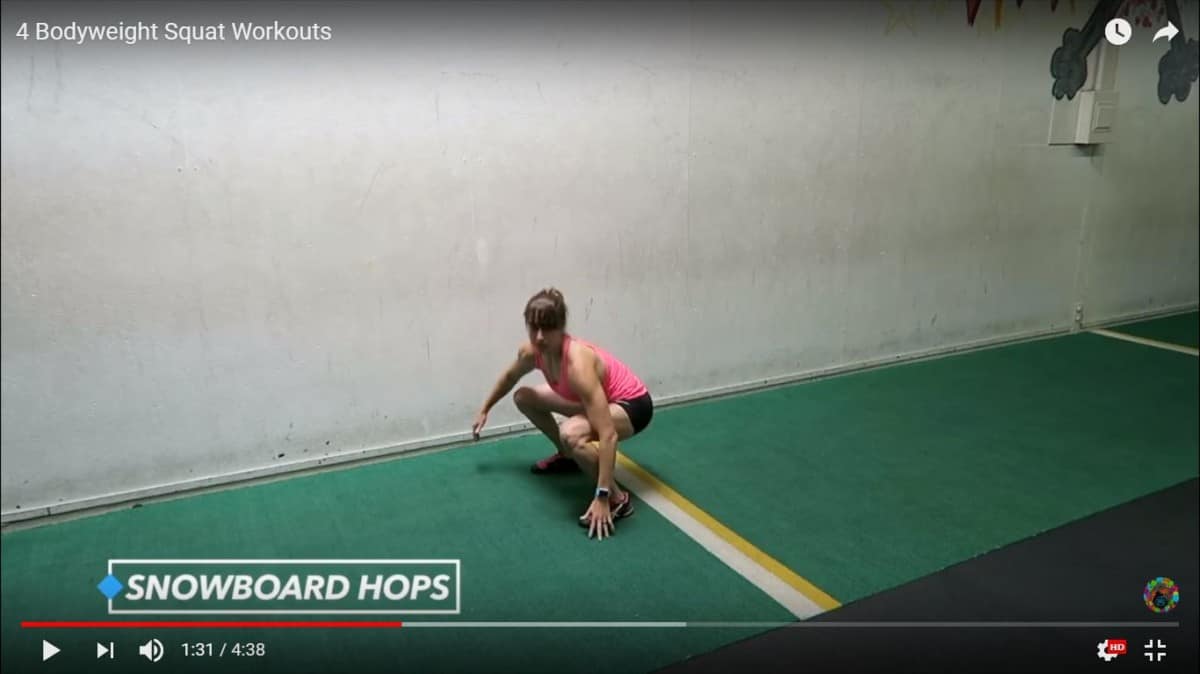 Of course, the more obvious metaphor for the resulting stance is snowboarding. That’s why the exercise is called snowboard hops.

Initial Position. Stand straight, keeping your feet wide apart and your arms slightly away from your sides.

The Move. Jump up and down to a quick squat as if you’re hopping on a snowboard. With your body facing right, position your left foot forward and your right foot backward. Bend your back and extend your arms sideways for better balance.

The moment your left hand touches the floor, hop up and move your body so that it faces the left side upon landing on your imaginary snowboard. Continue flipping to your right and left sides until the end of the 20-second interval. 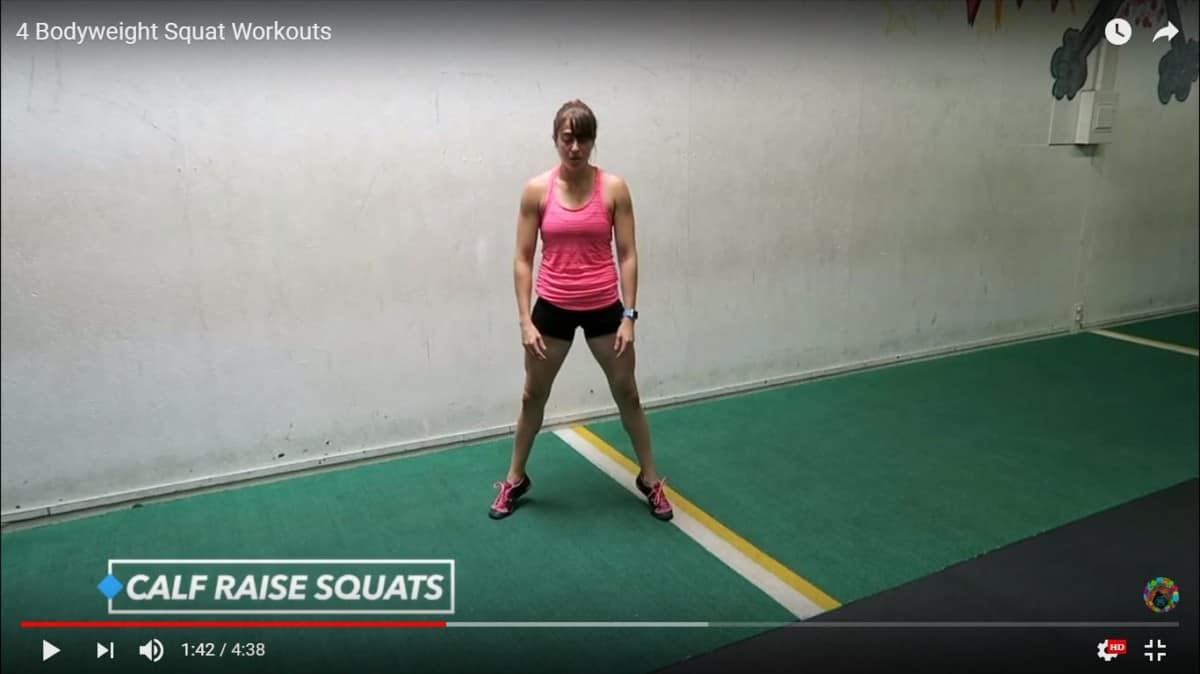 The Move. Move your body down to a quick squat and stand back up. Raise your heels, stand with feet flat on the ground, and then perform the quick squat again. Repeat the cycle of standing back up and raising your heels. Remember, you’ll do 50 reps for this and each of the exercises in the second bodyweight squat workout featured here. 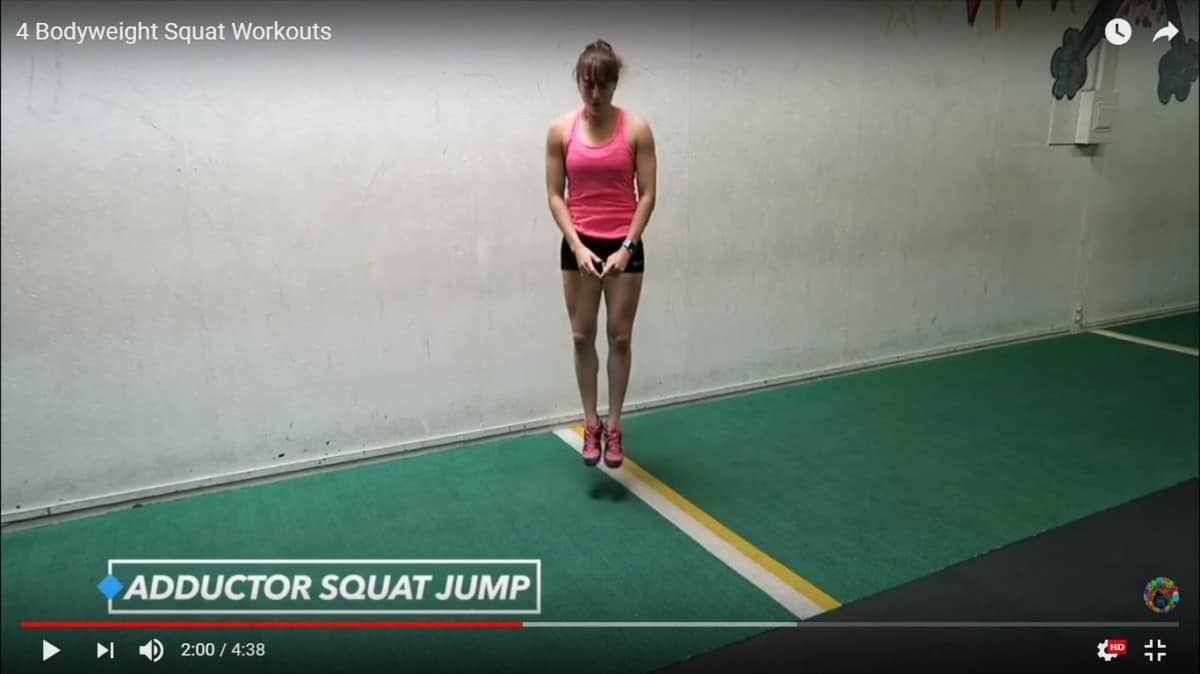 Adductor squat jumps look just like the basic squat jumps except for what you see in the image above.

Initial Position. Start with a standing position and set your feet wide apart. Let your hands touch together in front of you.

The Move. Bend your knees to a quick squat and jump up. As you jump, touch your feet together in the air as if they’re clapping. (The screenshot above illustrates this part.) As your body goes down, stretch your legs again so your feet would land wide apart in the consequent squat. Repeat jumping up and squatting down 50 times. 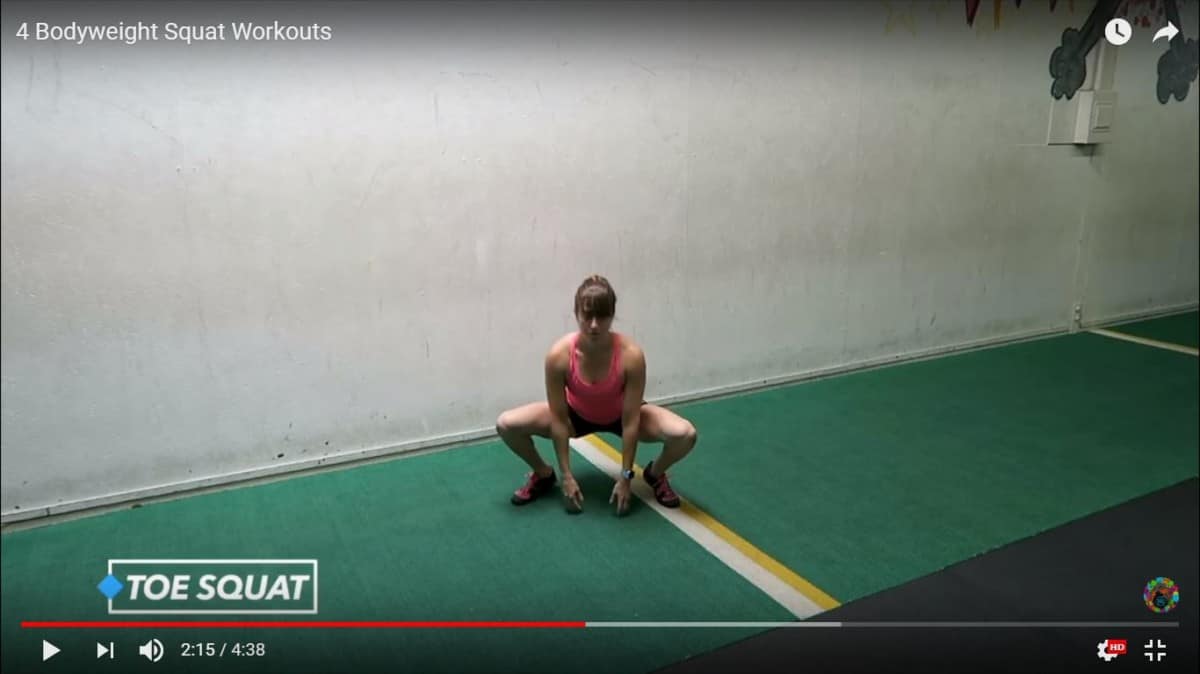 Instead of just doing the basic squat where your feet land flat on the ground, let your toes bear your weight. Perform toe squats with the rest of the elements of a basic squat.

2e. In and Out Squat Jumps 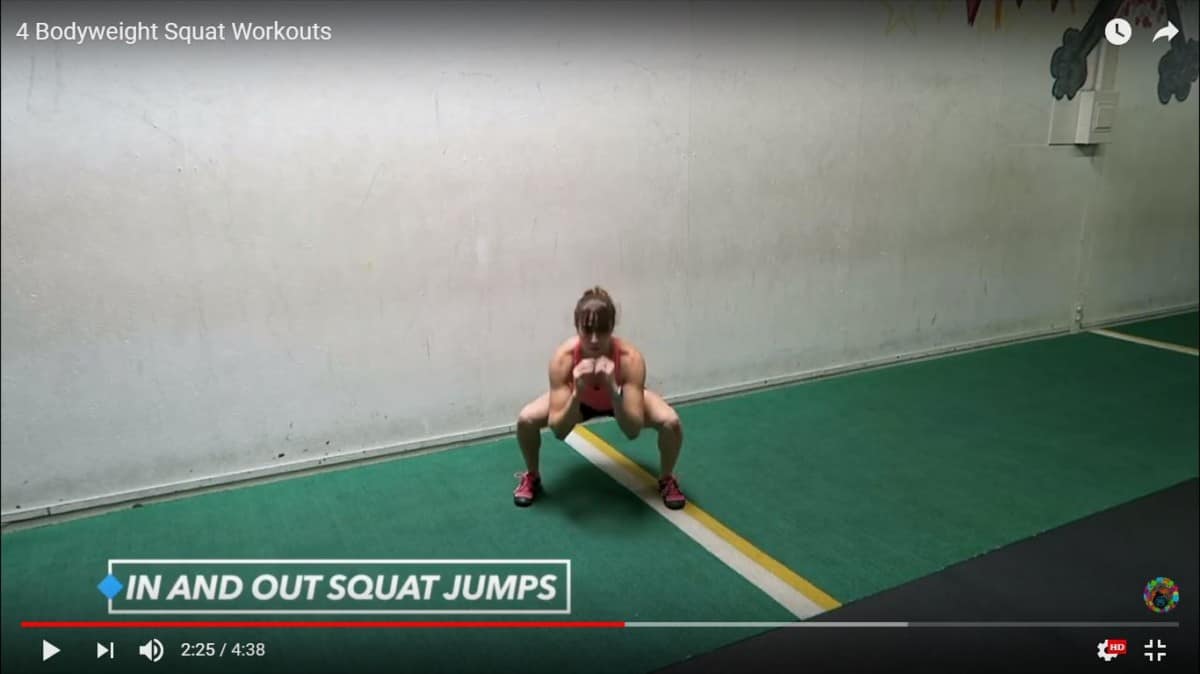 2e. In and Out Squat Jumps. Credits: Redefining Strength/YouTube

Now, this is another modification of squat jumps. So the basic initial position and moves are still present.  The “in and out” portion of this exercise’s name just refers to the position of your elbows with respect to your thighs.

Take a look at the above screenshot. The elbows are “in” between the thighs. By the next squat after the jump, you simply land on your feet with thighs closer to each other. That way, your elbows would find themselves “outside” your thighs. 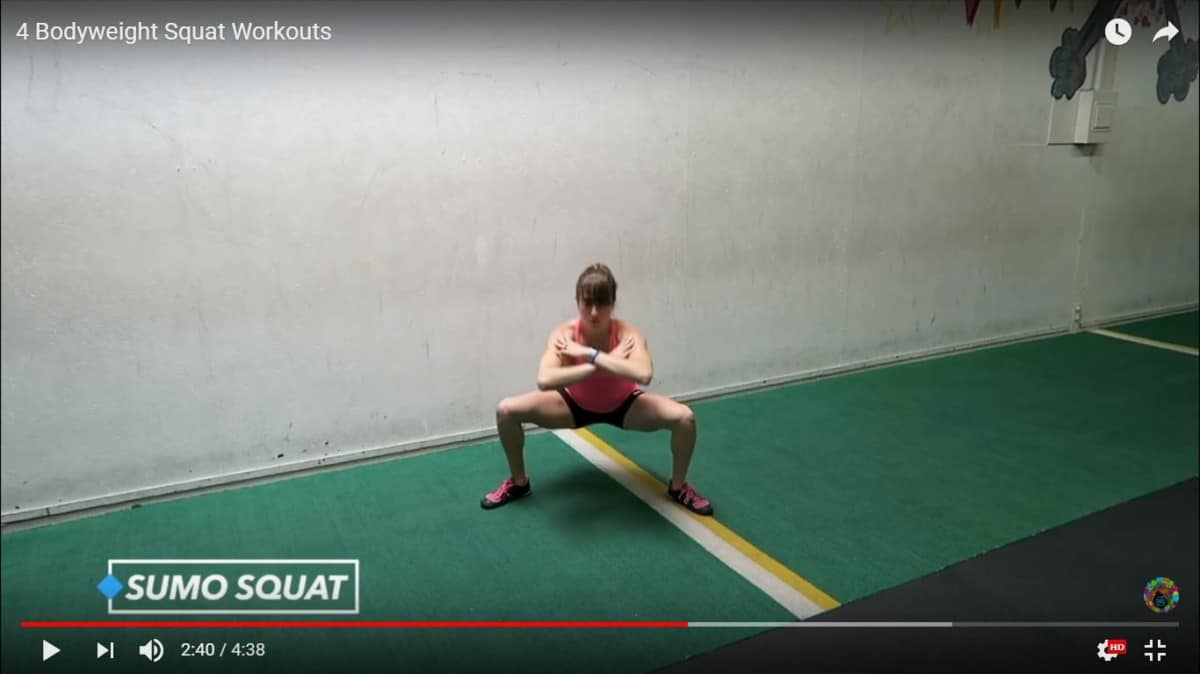 A sumo squat is a rather wide squat. Imagine doing just a basic squat, but position your thighs as wide as 120 degrees apart as you bend down. Also, instead of putting your arms forward, fold them over. Your overall look in your final squat position is a sumo wrestler ready for any attack.

Again, do 50 reps for this exercise as you should with the other 5. Remember to finish each set of 50 reps before getting to the second, third, and so on up to this sixth exercise. Time yourself and be sure to beat your own record in your next workout schedule. 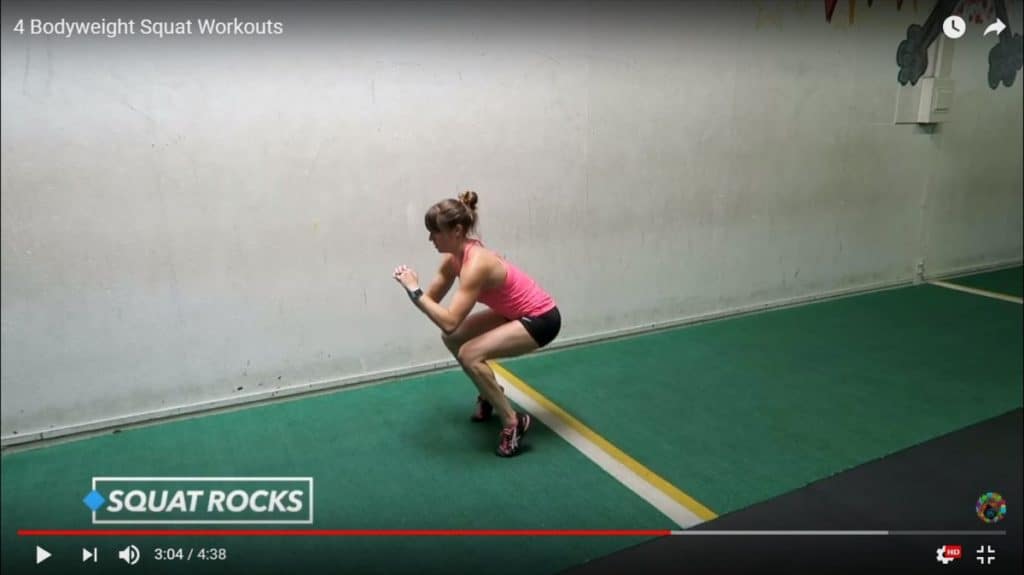 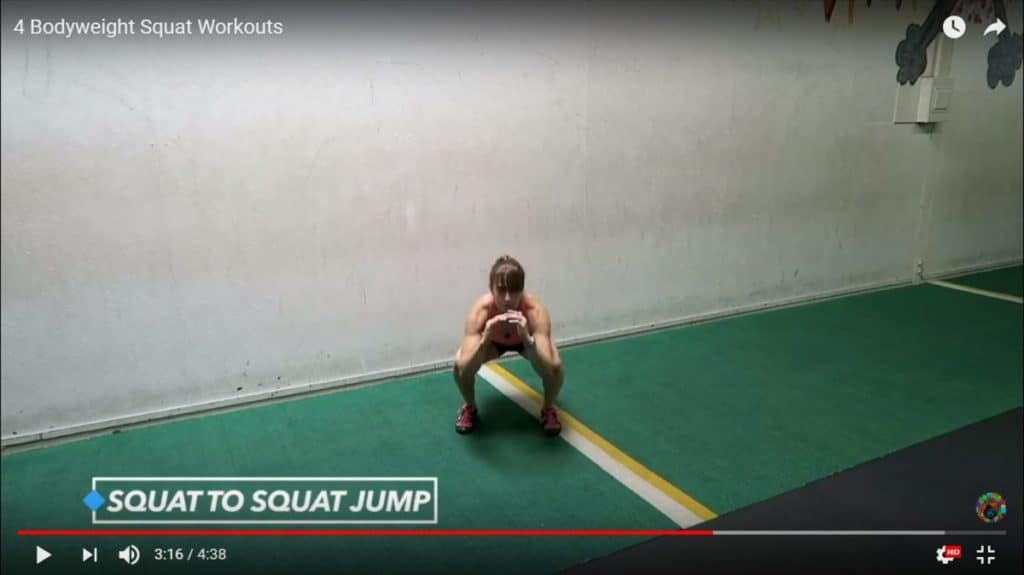 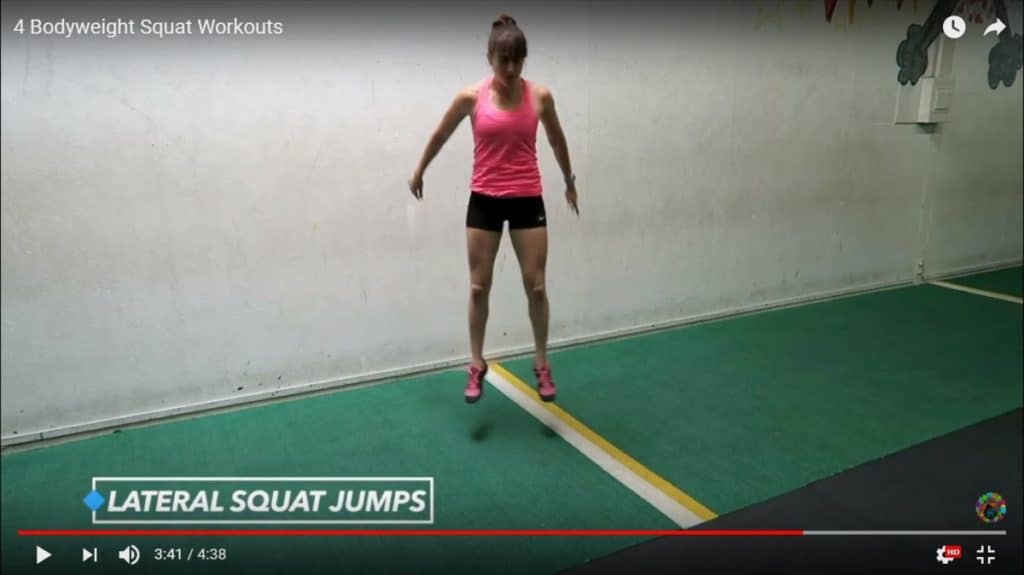 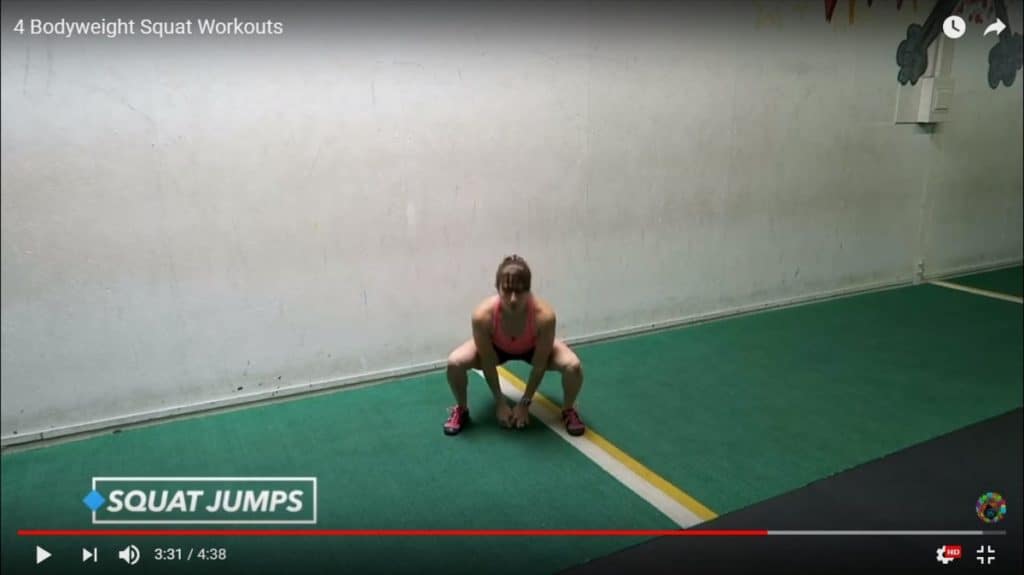 This third workout consists of four different squat modifications. You’re going to give each exercise a 20-second period. Now, the next instruction might sound like good news. You got 10 seconds to rest in between each exercise!

But aside from that, you got to make sense of why the workout is called a “pyramid.” Well, the reason is that you’re going to repeat all four exercises (including the rest periods in between). Now, what makes the workout a pyramid? Simple. You will work on the second set backward in sequence.

To make it simpler for you, here is the sequence. 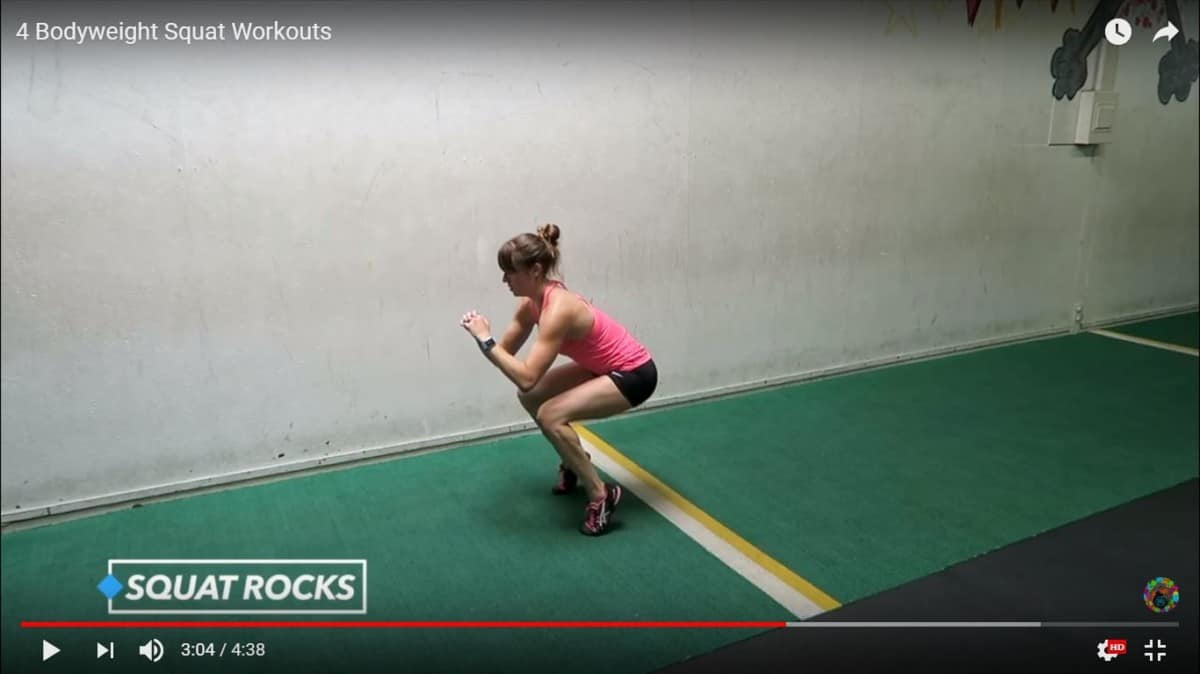 In squat rocks, you make use of your toes and heels for your body to rock back and forth. You’re doing that while you maintain your thighs at about right angles with your legs. Your upper body must lean forward, and your hands should retain that grip to secure your balance throughout the exercise.

3b. Squat to Squat Jump 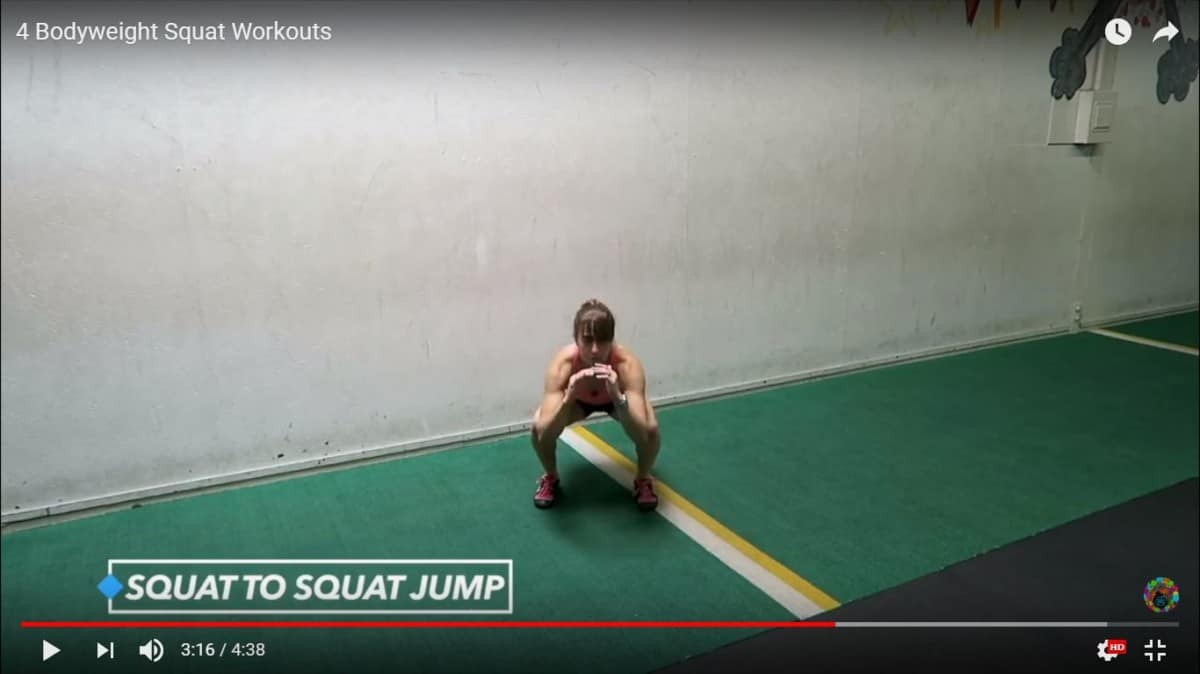 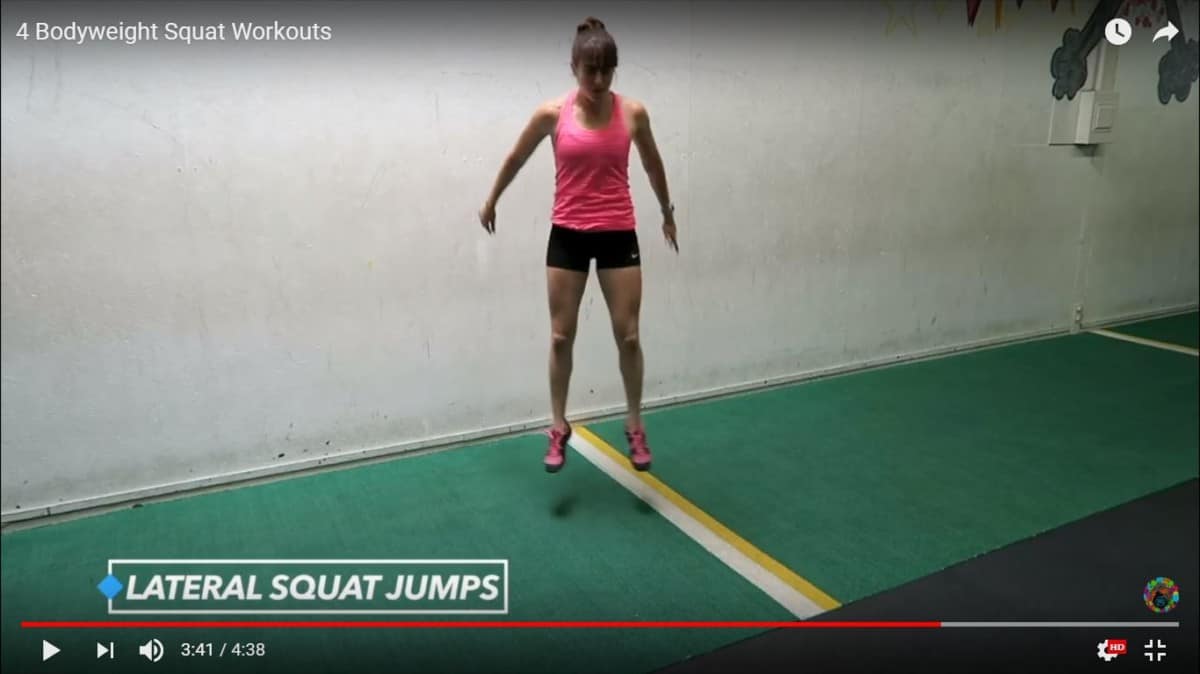 Here’s another set of modified squat jumps. As the name indicates, you’re going to swing yourself sideways while you’re moving up and down through the air. In effect, you’re landing either to the left or to the right first, then you do alternate landings for each of the squats. 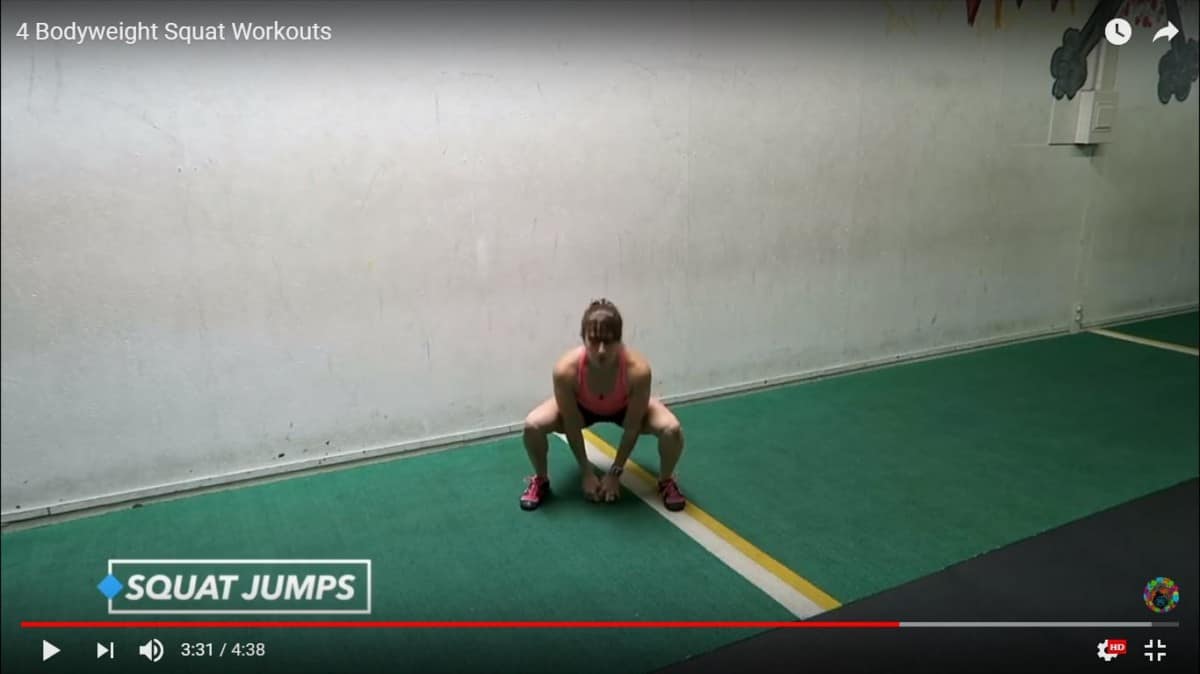 Yes, this is just the regular squat jump. As for the “left” and “right” variations indicated in the pyramid sequence above, simply turn to your left and right sides, respectively. In other words, just face your left or right side while doing the body weight squat exercises. 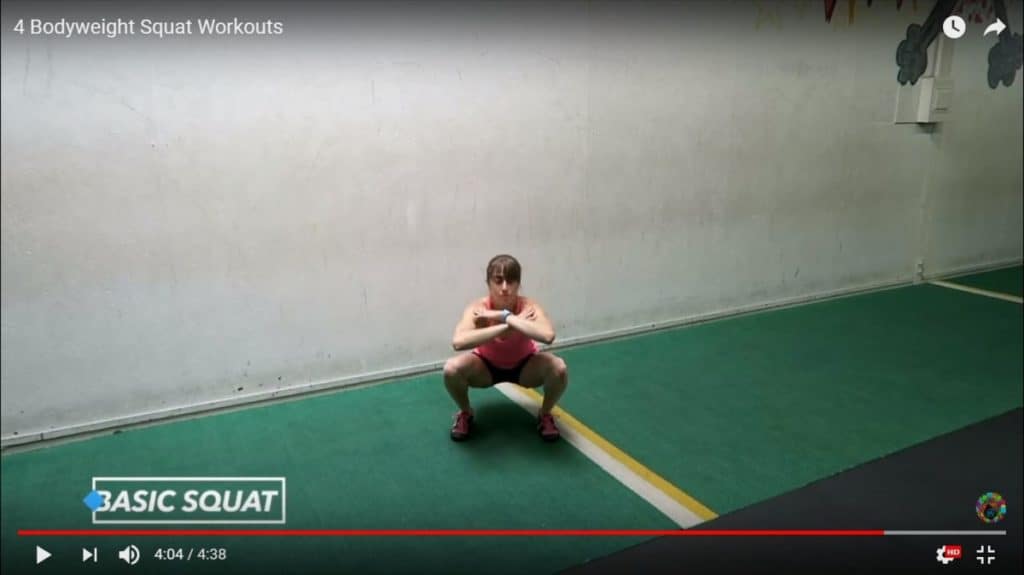 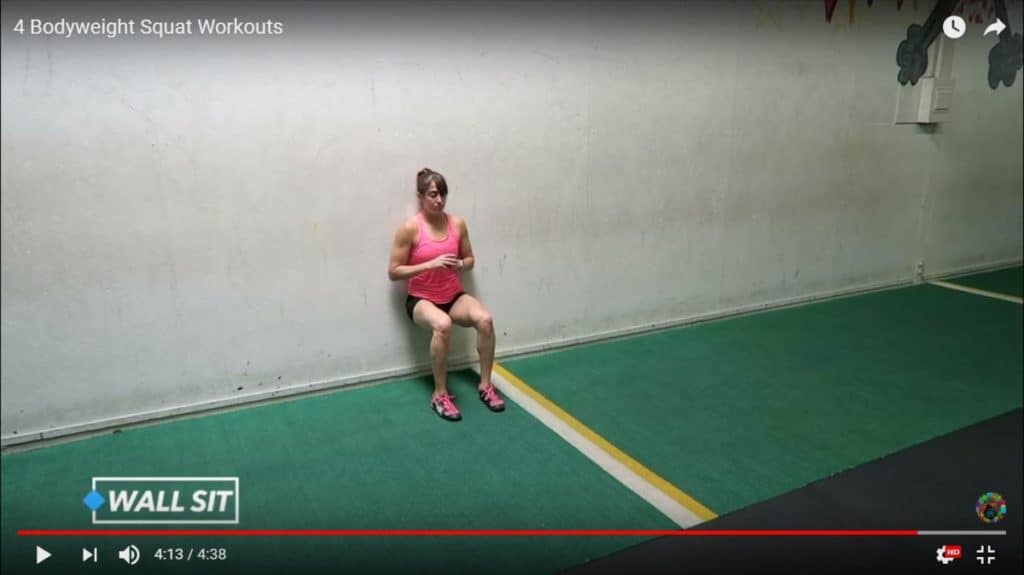 This workout only has two exercises in it. It is a basic squat workout, so it looks like we’ve gone through the most complicated ones first. Well, this fourth workout might suit beginners more. The two exercises are:

Pick a partner for this workout. Let Partner A do 20 reps of the basic squat, while Partner B does the wall sit for as long as Partner A is doing the reps. When done, take turns, and do 4 more rounds.

Important. Don’t take rests in between rounds to maximize the workout’s benefits!

As much as you love working on your upper body, give the same to your lower body. Your legs deserve that fat burn and muscle gain. You see, the bodyweight squat workouts didn’t have to appear complicated. The keys are variation and regularity. Give these workouts a try and let me hear how well you fared with perfecting the plan! I’m already getting there.